The mandate was to bring home salmon, but none of it looked good. They did have monkfish for $8/lb, which I’ve struggled with in the past. They also had some white asparagus which I had never tried to cook. What could possibly go wrong?

Monkfish loves garlic, so start with garlic oil.
In a small saucepan, take two heads of garlic, cut the root end off so the tops of the cloves are exposed. Use a small enough saucepan and just enough oil so keep the garlic heads under the oil. Let it simmer for about 30 minutes to an hour, make sure to not burn it. What you’ve made is garlic confit, in such a way that you now have two awesome garlicky ingredients: roast garlic cloves and garlic oil. 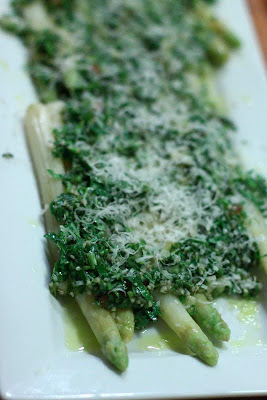 This goes well with a vinaigrette, topped with some grated parmesan. I found some tabouleh at the grocery store. You could just do it with chopped herbs. The point of the white asparagus is that they cook fast and you can serve them simply.
Blanch the asparagus in boiling salt water for 5 minutes and shock them in cold ice water to stop them from overcooking.
Make a basic red wine vinaigrette and add some herbs, parsley preferably for me, but cilantro would work fine, too. Or you can go as far as to make tabouleh and combine the two. OR, you can cheat like I did and buy a premade ingredient to save yourself a bit of time. OR, you could just skip it altogether and serve with either ranch dressing, balsamic vinaigrette, or some generic Italian dressing.
Big handful of flat parsley, minced
1/2 cup of large bulgur wheat soaked/simmered until soft
1 minced red shallot
1 small cucumber, small dice
1 small roma tomato, small dice
2 tbsp of lemon juice
salt to taste 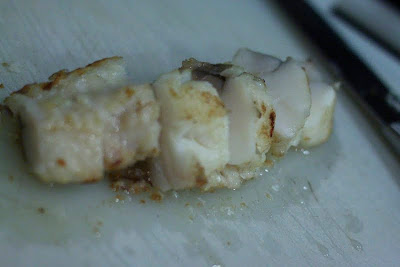 1. Pat the filets dry with paper towels and season with salt.
2. Bring the garlic oil to high temp in a cast iron pan.
3. Sear the monkfish while tilting the pan, spoon the hot oil over the fish as it’s cooking.
4. Flip about every 30 seconds or so. When they’re starting to turn a golden brown and are firming up, take them off heat and rest on a wire rack. It’s ok to overcook these more than a regular white fish. This isn’t a fish you necessarily want to eat raw. Your finishing temperature is about 130 or so.
5. Slice into medallions (inch thick) and serve.

The rest of the menu:

Toasted bagel rounds with roast garlic smear
You know how to toast bread, just smash those nice garlic cloves out that you used to make the oil, and make a paste out of them. Serve as a topping to your toast rounds.
Roasted Brussels sprouts
We’ve done this before. Trim the stem end off, toss in olive oil and salt, roast at 300 convection or 350 regular until browning and fork tender. Sprinkle a little apple cider vinegar, and add some sauteed bacon bits if you want.
Roasted potatoes
Find some fingerlings or new potatoes, toss in oil and salt just like the sprouts, cook them in the same oven until fork tender. These I finished off with a little ground chipotle pepper powder and sherry vinegar.