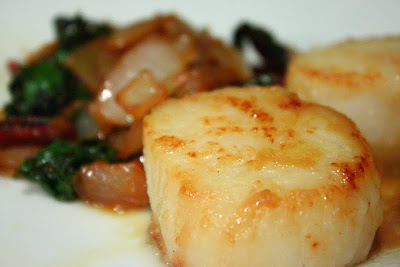 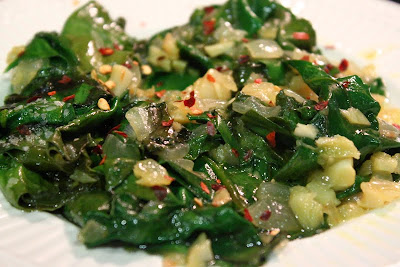 1. Sautee 1/2 diced onion and 2 cloves of sliced garlic.
2. Cut the stems out of a single bunch of well-washed chard (either green or red works well), and cut into 1 inch strips. You could braise these greens, in which case you’d leave the stems, but that’s a different recipe.
3. Put them in your sautee pan and stir over medium heat until they soften.
4. Sprinkle a few chile flakes and some lemon juice, season with some salt.

Seared scallops in saffron/white wine sauce
1. Keeping the rule in mind, take a small cup of dry white wine (about a half a cup), and put a small pinch of saffron in. In a few minutes, it steeps and gives a pretty intense yellow liquid. 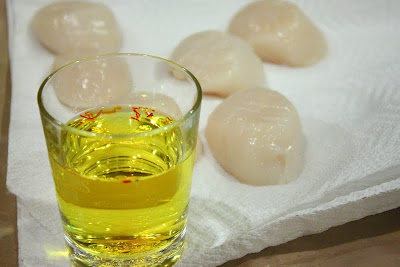 2. Dry the scallops well, and season with salt. If you want, you can dredge in a little corn starch or flour, especially if they’re not as dry as you want them to be.
3. Pan sear over high heat in a mixture of oil and butter, basting them constantly, flipping every 15-30 seconds as they allow. This will depend on what kind of pan you use, how much fat, the water content of the scallops, etc. If you have nice dry scallops, use a stainless skillet. If you’re worried that they’re wet, use the nonstick, and don’t worry if they don’t brown. When in doubt use more butter/oil than you think you need, but tilt your pan so that you use this more as a basting liquid than a deep fry.
4. When they’re done (for me rare to medium rare), let them rest on a wire rack while you finish the sauce.
5. In your skillet, pour off the fat, and add the wine/saffron combination. Scrape down the pan getting all those little brown bits in the sauce.
6. Strain and spoon over or around the scallops. 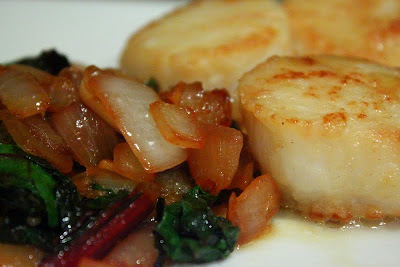 This recipe was modified out of Cooking Light magazine.  It was really flavorful and had those tastes of summer that I’m going miss really soon.  To start, get the biggest scallops you can get your hands on.  Obviously, the preference is that you don’t want to use frozen ones because a lot happens with the level of hydration and they become hard to sear.  The techniques used in this dish are pretty simple and consist of pan searing and making a quick vegetable sautee, a theme that has permeated my summertime posts, and with good reason.  It’s quick, easy, and provided you have fresh ingredients, tastes great.

The concepts I’m talking about here are:

The vegetable base is sauteed onion, corn and tomato. The scallops are simply seasoned (in this case brined) and seared with a combo of butter and vegetable oil, and garnished with basil.

2-3 scallops depending on size
1 ear of corn, cut off the cob with a knife or other unitasker
1/3 cup of onion diced
1/3-1/2 cup of tomato diced (1 regular sized Roma per person)

Start with the onion. Sautee over high heat and then add the corn. The hotter, the better, just remember to not add oil to your pan until your pan heats up, particularly on stainless or cast iron as it is supposedly less likely to stick. You also might want to think about a neutral oil with a higher smoke point like grapeseed. Finally, add the tomato and try to cook these down just a bit. The corn and onion will darken while the tomato will dehydrate just a bit. Go ahead and salt it here, and add a touch of lemon/lime juice to brighten it up.

This is going to take about 10 minutes or so of cooking after your initial prep. You could go in so many directions with this, though. Sub garlic for corn, add some red pepper (or various other ingredients) and you have the basis of sofritto, which is commonly associated with Caribbean cooking. Sofritto can also serve as a quick tomato sauce for pasta, meat, soups, beans, etc.
Want to refine it? Blend and emulsify with a little olive oil, strain, and you’ve got a pretty smooth sauce. See, the flavors are all there, it’s just a different presentation. If you want it to be more concentrated, just boil it down a little more and dehydrate it. If you’re going to do this, though, you need to not salt until you’ve reduced all you’re going to reduce, because it can easily become too salty.
Blended with chicken stock, and you’ve got the basis for an infinite number of soups. As I’ve pointed out before, once you establish the flavor profile you’re going for, it’s just becomes a matter of presentation.

Back to the recipe.   Set aside the veggies, because you’ll use this as the bottom layer.

For the scallops, I used the cast iron skillet. I’ve struggled with getting a good sear on scallops before, and it’s almost been a problem of dropping the heat or hydration. Remember that the more liquid in your meat, the more likely it will be to steam which prevents the Maillard (browning) reaction from occurring. It’s this browning process that magically (OK not really magically, but chemically) improves the flavor of pretty much any protein.

I chose to follow Keller’s recommendation and brine the scallops for about 10 minutes in a cool 3% saline solution.

Man that was tough! No, really, this is a clever idea which works great for shellfish. Think of when the fish is the most fresh. Right when it comes out of the ocean, right? And it just so happens that the salinity of the ocean is roughly 3%. You’re basically sticking them back in sea water for a quick dip, about ten minutes or you risk oversalting. But if that’s the ocean’s salinity, how could this happen? Because the meat itself is not continuously bathed in salt water en vivo, and there’s more to the scallop than just the muscle itself.
Another note on brining. You want the water to be cool (like deep sea water) because it will otherwise cook the meat prematurely, but the salt doesn’t readily dissolve in ice water. To get around this, you can take about a third of the volume of water as max hot tap water, add the salt until it dissolves (closer to a 10% solution) and dilute it with ice, keeping an eye on your scale until you get your ratio correct. Ain’t chemistry great?

So I had my pan heating up while I was working on brining the scallops. For the fat, I chose vegetable oil and butter around 50/50. So much for cooking light, huh? I think I may have overshot my temperature a bit as mine got a little dark, but they were still great. For pan-searing, the cast iron works great because it’s unlikely to lose heat when you add stuff to the pan, like a thin aluminum pan might. The stainless would work well also, just be careful not overcrowd the pan. A good rule of thumb is to make sure that the meat isn’t touching each other. If the temperature drops too low, it won’t be in the correct range for browning and will instead cause steam which will cook the meat, but you’ll lose the flavor benefit of browning. Of course, I guess you could blow torch them individually and finish in a warm oven if you wanted to be all crazy.
Scallops react poorly to overcooking and become rubbery. Your goal then is cook them until just opaque instead of translucent. You can typically tell just by looking at the sides of them. Just keep a close eye on them, and whatever you do, don’t cover with foil when they’re done. Ideally, you’d rest them a bit on a baking rack, with a drip pan to catch the juices which you can add as a light sauce.
Another note about cooking fish in butter is that as the butter particles themselves solidify and brown, it’s handy to have a spoon standing by that you can use to baste the meat continuously while you’re searing. This will enhance the flavor even more, and theoretically should cook them more quickly.
Final note about the scallops: some already have the adductor muscle removed, but some don’t. There may be a little knuckle of muscle that has some connective tissue associated with it. This part is tough and you’re best served by taking this off beforehand. However, if you’re going to make a sauce for the scallops, save this because browning them in your pan will add to the flavor. So don’t throw that part away.

Lay down the veggies, set your scallops on top. I served 3 per person, and sauced with whatever leftover juices/sauce I had. Garnished with something green for contrast (in this case basil), and there you have it!